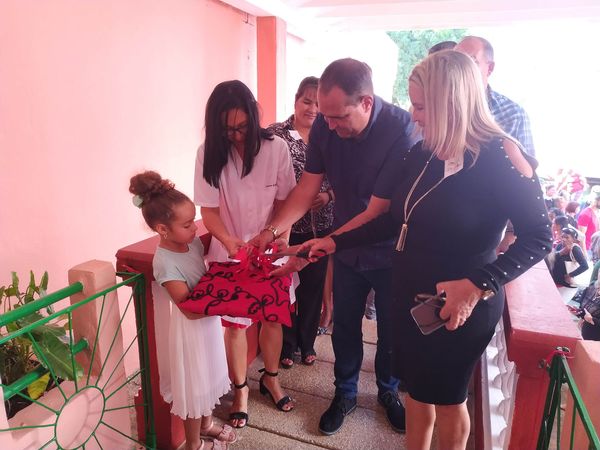 After intense days of constructive efforts, the First Children’s House in the province of Ciego de Ávila was inaugurated in the municipality of Morón, which bears the name of Luces de mi Patria.

It was Liván Izquierdo Alonso, member of the Central Committee of the Party and first secretary in this province, and Yoleisy Valdés Santiago, director of Education in Morón, who cut the ribbon that officially opened the new facility.

The children’s house is located in an area of the Roberto Zamora Special School, and consists of two mixed classrooms, with enrollment capacity for 40 children who will be cared for by seven workers, a coordinator, four educators and two teaching assistants.

When touring the new facility, Izquierdo Alonso held an exchange with the workers who will care for the children and praised the aesthetic and general conditions created for a welcoming stay for infants.

The Children’s Houses constitute an institutional modality of educational attention in early childhood.
They arose in 1993, from Ministerial Resolution 203 that establishes

the “Regularities for the opening of children’s houses”. In 2001, Joint Resolution No. 1/2001 was approved, which establishes the regulations for its approval and opening of this “variant of care for the children of working mothers with the use of premises in workplaces and cooperatives adapted with elementary basic conditions”.

It is an alternative to the lack of capacities in children’s circles.