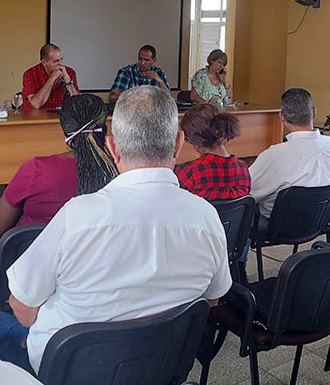 With the objective of promoting the substitution of imports and the increase of tourism services in the province of Ciego de Avila, the insurance check of the sector was carried out, chaired by Liván Izquierdo Alonso, member of the Central Committee of the Party and its first secretary in Ciego de Ávila , and Tomás Alexis Martín Venegas, Governor.

The importance of the Jardines del Rey tourist destination at the national level was highlighted by Iyolexis Correa Lorenzo, delegate of the Ministry of Tourism (MINTUR) here, who explained that 20 percent of foreign visitors who arrive in Cuba stay on the keys from the north of Avilanian territory. That places it as the second pole, after Varadero, with the largest number of tourists.

Hence, ensuring supplies is the objective of regularly checked work, especially with regard to agricultural orders, since the beginning of the month of September was quite tense with the delivery of fruits and vegetables, which has already been improving since of a group of measures taken, said Correa Lorenzo.

The transportation of workers was also analyzed and deficiencies raised at the beginning of the high season were reiterated, such as the low technical availability of the buses due to a lack of parts and pieces, in addition to road signs.

According to the MINTUR delegate, as part of the day of decisive effort, the sector continues to attend 10 constituencies, 9 hospital wards and, in the case of the 47 planned actions, 30 have been completed.

For her part, Dr. Nilka Pita Alemán, Provincial Director of Health, emphasized the importance of once again increasing the sanitary control measures established to combat COVID-19, mainly those related to screening among workers, so that who do not attend with respiratory symptoms.

Likewise, random samplings are carried out on tourists. In the last 15 days, 71 flights have arrived at the Jardines del Rey airport with more than 12,800 vacationers. A random test was applied to 1007 passengers, for a result of 4 positives.

“Despite the adversities that are occurring, the sector confirms a successful tourist season,” she revealed at the work meeting.