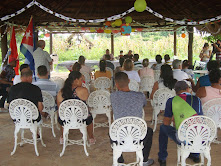 With the planting of 30 fruit trees, the balance assembly of the work developed by the Biofood Research Center, CIBA, of the Avilanian city of Morón, began during the first semester of this year.

Held in the context of the celebrations for the 30th anniversary of its foundation, the conclave served to analyze the main achievements of the center, as well as to propose ways to solve the main deficiencies stated.

Referring to the main successes, the Master Rafael Pérez Carmenate, territorial delegate of CITMA in Ciego de Ávila, said that after 30 years the CIBA has established itself as one of the outstanding scientific institutions in the province, with significant contributions to agricultural development. and environment of that territory.

The Biofood Research Center was inaugurated on July 16, 1992, whose main mission is, among others, the study of the environment based on the work of recycling, treatment of organic liquid waste and obtaining renewable alternative energy.