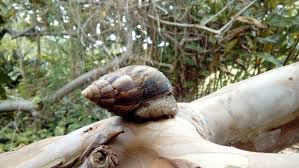 The agricultural authorities in the Avilanian municipality of Morón call to increase the perception of the risk that the presence of the giant African snail presupposes in the face of a possible increase in said invasive species during the months of June to August due to the weather conditions of the period.

The main threat generated by the mollusk is to people’s health, since said animal is one of the vectors of the nematode angiostrongylus cantonensis, which causes eosinophilic meningoencephalitis, a disease that can cause the death of the patient and has already been reported in Cuba. , although it can also cause serious damage to agriculture and biodiversity.

Among the main strategies for the control of this animal, specialists suggest the elimination of debris and other materials in which the mollusk can shelter, as well as the use of traps that use fruit remains and manual harvesting, taking into account security measures. necessary to avoid direct contact.

In this way, the socialization of the measures that contribute to the control and elimination of one of the most dangerous pests that currently affects almost the entire country, and whose presence in the province of Ciego de Ávila is already a proven fact for several years, is sought. years.