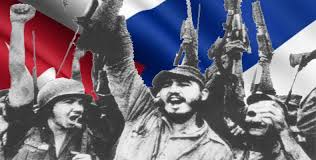 The history of Cuba in the 1950s must never be forgotten or even overlooked so that that system riddled with social inequalities, large-scale unemployment, illiteracy, overwhelming and shameful misery, corruption and repression never returns.

There are multiple and irrefutable testimonies of the time about the existence in fields and cities of a ruthless, dependent and underdeveloped capitalism, very typical of the dictatorship of Fulgencio Batista.

So much so, that a Catholic group revealed in 1957 a survey on the standard of living of the Cuban agricultural worker, according to which, on average, they barely had more than 25 cents a day to eat, dress and wear shoes, 60% did so in shacks with thatched roofs and dirt floors, without toilets or sanitary latrines, or running water.

44% did not attend or could never attend a school and 90% are lit with bright light.

Such a bleak picture established the coup tradition of Fulgencio Batista, army stenographer in his first institutional rupture on September 4, 1934, and Colonel in the second, on March 10, 1952, the highest rank then.

Only three and a half weeks later, the Constitutional Statutes were promulgated, through which the president held the executive and legislative powers and determined the judicial power.

A sobering example of his trail of crimes was carried out in August 1934 by Mario Alfonso Hernández, Lieutenant-Colonel in command of the Juan Rius Rivera regiment, from Pinar del Río, who demanded that the army chief comply with the agreement of the Junta de los Eight that established the rotating nature of the headquarters of the armed forces.

Batista did not answer him at the moment, but agreed to give him an answer. At dawn they knocked on the door of his house, he asked who was looking for him and when he identified the one who did, he opened it confidently: they machine-gunned him in front of his wife.

The one who proclaimed himself the strong man of Cuba and, so much so, that he gave himself the rank of Major General, began to accumulate a fabulous fortune, traveled to the United States, settled in an apartment in the Waldorf Astoria hotel in New York, and had a lavish residence built in Daytona Beach.

To dissolve his first marriage, he had to give his first wife the sum of four million pesos and continued a millionaire existence on the Kuquine farm, with which he demonstrated the example of impudence and cynicism, as well as his characteristics of unscrupulousness, indignity and egotism. .

Under these circumstances, the assault on the Moncada and Carlos Manuel de Céspedes barracks, in Santiago de Cuba and Bayamo, respectively on July 26, 1953, constituted the first popular response against his dictatorial regime, with the difference this time of a movement ( embryo of the single Party in the future) and with arms in hand.

Barely three years after that holocaust on July 26, the news of the uprising was captured on the yacht Granma on November 30, 1956, in Santiago de Cuba.

Homer Bigart, a journalist from The New York Times, wrote on March 23, 1958, what would be the despot’s sentence on January 1, 1959: “if the North American political presence in Cuba continues, the United States will be left with a only friend: the dictator Fulgencio Batista”.

More than 20,000 deaths cost the presumed republic the presidency of a criminal and a thief who until January 1, 1959 held power by force and in the same way the popular rebellion settled accounts.

CMJP, the third station in Morón