Repair and technical maintenance actions continue for cars and locomotives 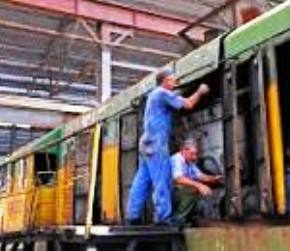 The labor collectives of the Base Business Unit Talleres Ferroviarios of the Avilanian municipality of Morón act with the purpose of complying in a timely manner with each repair and maintenance activity for cars and locomotives.

The intense work days with multiple difficulties due to the lack of spare parts and work equipment put the knowledge and creativity of the workforce to the test.

At the center, repair and maintenance actions are undertaken on cars and locomotives from all over the country, which multiplies the commitment of workers in a sector characterized by the longevity of moving equipment.

The Morón Railway Workshops began to be built in 1922 and Jamaicans and people of other nationalities contributed to the execution. In January 1923, the initial steps were taken in the construction of the Round House, a fundamental area of ​​that old facility.