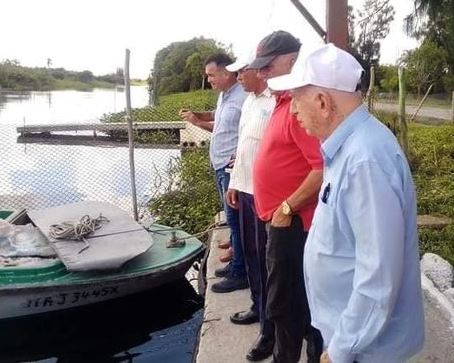 Commander José Ramón Machado Ventura held a pleasant exchange with directors and workers of the Laguna de la Leche extractive unit and the Alevinaje station of the Avilanian municipality of Morón, where he confirmed the development of the territory’s aquaculture program.

Machado Ventura, accompanied by Liván Izquierdo Alonso, member of the Central Committee and top leader of the Party in Ciego de Ávila, called for an increase in production in the aquaculture units, and the securing of fishing gear.

During his journey, he became interested in the supply of animal feed, and the importance of achieving intensive crops and the genetic improvement of species, as a strategy to achieve food sovereignty in the country.

Likewise, the preparations to face the aquaculture campaign corresponding to 2023, and the fulfillment of the production of larvae and fingerlings were evaluated.