They recognize young people from Construction Company for Tourism 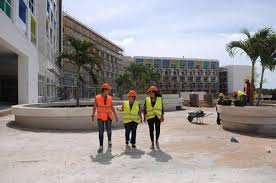 As part of the commemorative day for the 69th anniversary of the assault on the Moncada and Carlos Manuel de Céspedes barracks, five young workers from the Cayo Coco Tourism Works Construction Company were promoted, by virtue of order 194 of the Minister of Revolutionary Armed Forces.

At the meeting, Major Edisnel Gamboa Sánchez spoke on behalf of the ascendants, and expressed his commitment to the work of the Revolution and his confidence that it will emerge victorious despite the tightening of the blockade and the attempts to destabilize the government of the United States of America.

The promotion activity of young workers of the Cayo Coco Construction Works for Tourism Company evidenced the strength of Cuban youth and the deep conviction that great tasks can be placed on the shoulders of that same youth.