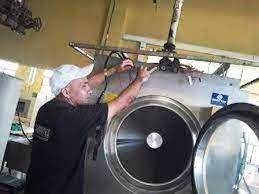 The members of the local development project SERVTES-Development undertake the repair of the industrial washing machines of the Roberto Rodríguez general teaching hospital in the municipality of Morón, in a situation that forced them to carry out this important activity in the Antonio Luaces Iraola hospital in the provincial capital, and under very unorthodox conditions.

This was confirmed by the engineer Alberto Gómez Abreu, leader of SERVTES, who explained that on this occasion the challenge was taken on together with the scientific group he leads, and that it is made up of students and recent graduates of the automatic engineering specialties of the University. Central of the Villas.

For their part, some members of this scientific group, such as Alberto Cisneros Aguilera and Arley Leyva Ávila, expressed their satisfaction and gratitude for the opportunity to acquire new knowledge while facing real situations whose solution they can directly influence for the good of the development of the nation.

It is about guaranteeing the future of the country, especially in an area as sensitive as Public Health, betting on science, technology and innovation, and at the same time fulfilling the legacy of the historical leader of the Cuban Revolution and the claim of the highest management of the Greater Antilles, precepts that SERVTES-development defends as part of its corporate purpose.

They propose commitments in the Turiguanó Genetic Livestock Company for 2023