Palmares branch is granted the status of National Vanguard 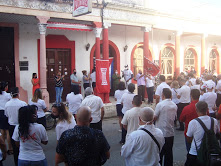 The headquarters of the Palmares extra-hotel branch in the Ciego de Ávila province, was the scene of the ceremony of delivery of the status of Vanguardia Nacional collective, in recognition of the results obtained at the end of the year 2019.

An income of more than ten million, 700 thousand of them above what was planned for 2019, and a growth of more than one million 100 thousand compared to the previous calendar, make the awarding of the award possible.

Among the awards to which it has been credited, Palmares has received the condition of compliant For the path of triumph, and recognition for its outstanding participation in recovering from the ravages caused by Hurricane Irma, despite the effects of the COVID pandemic 19 and the tightening of the United States blockade against Cuba.

The activity was attended by Amaury Musa Lara, first secretary of the Party in Morón, and Magdalena Díaz Matos, president of the Assembly of People’s Power, and Iyolexys Correa Lorenzo, delegate of the minister of tourism in Avilanian land.