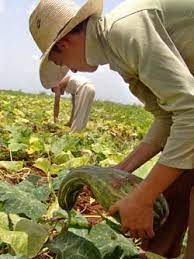 The activity of young peasants from the municipality of Morón took place in areas of the El Vaquerito Agricultural Production Cooperative, in the community of La Rosa, with the presence of leaders of the Union of Young Communists, ANAP and agriculture, as well as a representation of the youth universe of several of the productive bases present in Morón territory.

Among the topics analyzed, he highlighted the need to increase the membership of the UJC with young people who today stand out in the fulfillment of agricultural work in each of their jobs, in addition to the need to support them in everything they need, especially when His intention is to increase the production of food for the people.

Regarding the attention that young people need, Renier Cruz González, an official of the ANAP National Bureau, said that their attitude should be recognized within the framework of the neighborhood and the family, while Juan José Guerra Rivero, delegate of agriculture in Tierra del Gallo, he referred to the commitment of the sector he leads with the youth of Morón, particularly around the delivery of idle land.

The asset of young peasants from the municipality of Morón demonstrated the commitment of the youth of this territory with the economic recovery of the country from the production of food even in the midst of the limitations that affect the agri-food sphere, which they overcome with talent , delivery and a lot of desire to do.