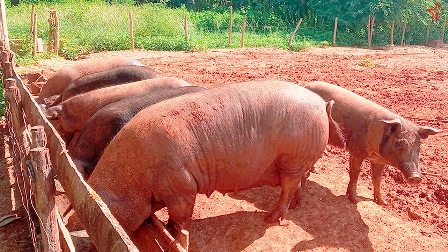 A firm alliance between the Animal Bioaliment Research Center, CIBA, located in the Avilanian municipality of Morón, and pig farmers from the 10 municipalities of the province, allows the number of preserves of this breed to grow for years, according to Nury Pérez. Valdés, Master of Science and Agricultural Engineering and project coordinator.

The CIBA began to irradiate genetic material for the formation of pig preserves since the end of 2018 and, to date, some 35 producers who have conditions, especially in relation to food and space for their development, have benefited from a stallion and at least three females to achieve the reproduction of the species, added the specialist.

“We advise breeders in the management and care of this breed, whose weight gain is less than the commercial one, but it can be fed with a strain of banana, yucca, sweet potato, honey, tithonia and, of course, palm trees,” Pérez said. Valdes.

Since 2013, the CIBA began studies of the Creole pig, actions that were aimed at the improvement and preservation of the breed and the diagnosis of the main breeders, in order in recent years to guarantee gene reserve preserves in rural areas and the use of local food alternatives. (ACN)