Entrance of the mambises to Morón 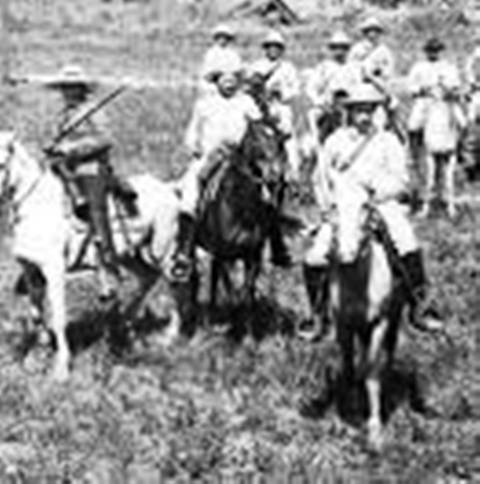 On November 12, 1898, the mambises entered Morón after the end of the War of Independence. They paraded sick, impoverished, with the humble clothes with which the dignity of the action dressed them, with the courage and emotion that the longed-for freedom that they honorably believed they had conquered overwhelmed them.

But Generalissimo Máximo Gómez viewed with suspicion the US intervention and occupation that would come immediately. On January 6, 1899, he addressed the Executive Commission of the Assembly of Representatives with phrases like these: I do not believe that now that the time has come, a single minute of time should be wasted in undertaking this work, the only means of completing the work and to prevent the foreign power –for me unjustifiable and that in the long run constitutes a danger for the absolute independence of Cuba- that it exercises in this land.

And later he would write in his Campaign Diary, this time dated January 8, 1899: “The Americans are charging too dearly, with the military occupation of the country, their spontaneous intervention in the war that we have sustained with Spain for freedom and the independence…”

To then continue in his diary: So natural and great is the disgust and embarrassment that is felt throughout the Island, that the people have barely been able to expand celebrating the triumph of the cessation of power of their former dominators… The situation, then, that is has created this people, out of material misery and embarrassment for being inhibited in all their acts of sovereignty is more distressing every day, and the day that this strange situation ends, it is possible that the Americans will not leave here even an adarme of sympathy …

The sincere belief of almost all those men who with humility, with simplicity, but with all the dignity that their participation in the struggle had conferred on them, entered Morón, and with the just suspicion with which the Generalissimo expressed himself in his Campaign Diary and in Narcisa’s Proclamation, he reminds us once again that the war we are waging against North American imperialism is not due to a recent cause, but has been given, historically, since the United States of America began to covet the possession of Cuba in those long ago years.

Commander Braulio Sánchez Valdivia, leading the cavalry, entered Calle Real, today Martí, while the infantry, led by Colonel Quijano, entered Calle Príncipe Alfonso, now Libertad. At that critical moment, the brothers Miguel and Pastor Pastor Salgado, owners of the La Flor Cubana store, took a cedar board more than five meters long that they had in their establishment and wrote the word Libertad on it, which they placed on the wall of the store, with which they alluded directly to the fact that at that moment the highest representation of Liberty was entering the town of Morón, according to the dream of the patriots of that time.

This determined that when the names were changed to the streets of Morón, dated September 29, 1900, due to this initiative of the Pastor brothers, this street received the name of Libertad with which it has passed to posterity.

In paying tribute to the men who, under the command of Colonel Juan Pedro de la Rosa Quijano and Benito of the Liberation Army, made their triumphal entry into the town of Morón on November 12, 1898, we remember all those patriots who, regardless of their origin or social classes, fought bravely for three decades to achieve independence from the Spanish colonial regime, a commitment that was cut short by the US intervention in the war that the Cuban people waged against Spain.