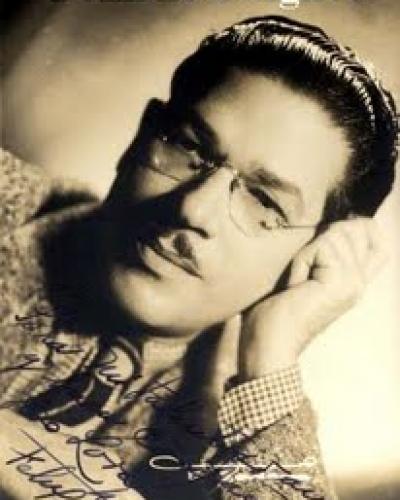 Félix Benjamín Caignet Salomón is known for his song ‘Frutas del Caney’ and for the most famous Cuban novel of all time: ‘El Derecho de Nacer’, which gave him international fame. With this work he traveled in the 50s of the last century through dozens of Spanish-speaking countries, as well as the United States.

The novel, which was always heard on the radio and there are different versions of it, was made into movies on several occasions by Mexico, Brazil and Spain, and was translated into English, French and Portuguese, keeping generations of Cubans in suspense since its first chapter.

As a creator, Félix B Caignet had a fruitful career, both in the musical field and in the narrative; He is the author of songs like I Hate You, Mentira, Carabalí and his popular Fruits from Caney, the latter of great success and popularity.

His name is more associated with journalism and narrative, because Caignet began as a journalist for court reports in the Judicial Power of Santiago de Cuba, in 1914.

He also wrote verses, plays and was a self-taught narrator, actor, painter and musician. His children’s stories were published in magazines and serials, and were broadcast in a program of that cut.

Félix B Caignet established himself on Cuban radio with episodes of detective Chan Li Po, a play with which he traveled to Havana and with which he made his first trip to Argentina, where he created popular humorous characters.

The first Cuban sound feature film, ‘The Red Snake’, is his creation, but it was ‘The Right to Be Born’ the novel that gave Félix B Cainegt international fame.

With that work he kept generations of Cubans on edge, pending each chapter. The novel, which was always heard on the radio and there are different versions of it, was made into a movie on several occasions in Mexico, Brazil and Spain, and was translated into several languages.

Caignet was capable of interpreting all his characters, mainly the children’s ones, and created in Cuba the genre of suspense, detective and narrator.

Nazario talks about the pedraplén