Nazario talks about the pedraplén 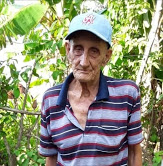 One of the builders of the Turiguanó-Cayo Coco pedraplén, Nazario Placencia Gutiérrez, recalls the heroism of the El Vaquerito contingent, who worked tirelessly to fulfill the task of the Commander-in-Chief, who indicated Here you have to throw stones without looking ahead.

It was a feat to unite the Avilanian keys with the mainland, highlights the founder of the Communist Party of Cuba, who highlights the constant concern of Fidel and the personal example of the Hero of the Cuban Republic Evelio Capote Castillo.

Nazario Placencia reports that he worked in the quarries where the stones were extracted, with almost no resources or technical advice, nevertheless the task of completing the Turiguanó Cayo Coco pedraplén was accomplished, an unprecedented masterpiece that opened the doors to international tourism.

The builder from Ciego de Ávila, Nazario Placencia Gutiérrez, came to the El Vaquerito contingent with the experience of previously assuming the role of gunner and quarry chief, tasks that he assumed with dedication.

This man, who knows the excesses of capitalism, tells us that he cut cane manually for 35 harvests and then devoted himself to the construction sector, where he became a national vanguard.

Born in Falla, in the Chambas municipality, Nazario Placencia Gutiérrez instilled in his children a love for the Revolution and today, at the age of 92, he confesses that he remains convinced that working efficiently will boost the country’s economy.

His years as a member of the El Vaquerito contingent, dedicated to the construction of the Turiguanó Cayo Coco stonewall, forged his spirit of work and, according to him, the majestic engineering work demonstrated that nothing is impossible when will and perseverance come together.

They deliver productions to prioritized centers of Education and Health